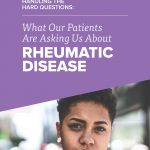 A chapter from HANDLING THE HARD QUESTIONS:
What Our Patients Are Asking Us About Rheumatic Disease

Read and download this booklet on our Workforce Resource homepage

Each day, rheumatology nurses, nurse practitioners, and physician assistants field dozens of questions from their patients with rheumatic diseases, and they need to be able to properly and effectively communicate appropriate responses. This pocket guide includes a brief summary of evidence surrounding some of the most common—and challenging—questions that patients with rheumatoid arthritis, psoriatic arthritis, gout, and systemic lupus erythematosus are asking about. We hope you find this guide useful for your professional development and that it assists you with your day-to-day patient management.

How likely am I to pass this onto my children? | Psoriatic Arthritis (PsA)

Given the link between autoimmune disease and genetics, many individuals with PsA and other rheumatic diseases, such as rheumatoid arthritis (RA), worry about the chance of passing the disease onto their children.

To answer this question, researchers often look at how often a condition or disease occurs in multiple generations of a family. Like psoriasis, PsA tends to run in families, with an estimated 40% of individuals with PsA having at least one close family member with either psoriasis or PsA.1 Similarly, studies have found that individuals with a family history of RA have a 3 to 5 times increased risk of developing RA themselves, especially if the RA is in a first-degree relative.2

While data like this support a familial connection, it is important to establish if other factors are at work besides genetics. Twin studies are used to evaluate the relative contribution of genetics and environmental factors to the expression of a trait or disease by comparing the rates of disease development between identical and non-identical twin sets. In the case of PsA, one twin study found the rates of PsA in identical and non-identical twin sets were similar, indicating non-genetic factors also play an important role in disease development.5

Unfortunately, the inheritance pattern of PsA is still unknown, and a number of different genes are believed to be involved in its development.1 Furthermore, PsA is thought to be a multifactorial disease, requiring an environmental trigger in the setting of genetic predisposition.3 This makes it hard to determine the risk of passing the disease onto a child. While similar numbers for PsA are scarce, scientists believe that at least 10% of individuals inherit one or more of the genes that increase their risk of developing psoriasis. However, only 2-3% of the overall population develops psoriasis, highlighting the role that environmental triggers play.6