When I met JP, she had just turned 22 years old. She had been living with systemic lupus erythematosus (SLE) since the age of 13, suffering through many ups and downs.As with every other young lupus patient I see, JP had extremely aggressive disease. Since being diagnosed, she had presented at one time or another with almost every major complication of SLE, including bullous lupus. She had tried (and failed) numerous oral medications. Diaminodiphenyl sulfone caused hemolytic anemia and neutropenia. She could not tolerate methotrexate. Azathioprine did not work. She would not take mycophenolate mofetil—the pills were too big. 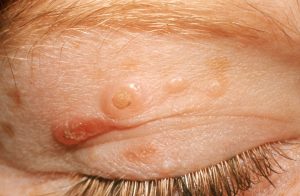 Molluscum contagiousus is a virus-caused skin condition characterized by the presence of white, umbilicated papules. It is common in immunocompromised patients, especially adolescents.

Being immunosuppressed also caused JP to develop molluscum contagiousus (see image above) over her face. You can imagine how depressed this would make any teenager, and it caused JP to isolate herself from her classmates throughout high school.

Then, at the tender age of 20, JP was given the greatest of all challenges—Class III and IV lupus nephritis.
Even for the most experienced provider, a mix of Class III and IV lupus nephritis is considered a beast with no reins. It can go very badly, very quickly. In hopes of getting even a minimal amount of control over the disease, JP was urged again to try mycophenolate mofetil, although she was honest in telling her providers that she was often noncompliant with the suggested regimen.

During her treatment, JP developed Libman-Sacks endocarditis, a form of nonbacterial endocarditis that is sometimes seen in association with SLE. This required the addition of yet another pill to JP’s treatment regimen.

Things became even more complicated when JP became pregnant at the age of 22. That resulted in an immediate transfer from her pediatric rheumatology practice to an adult practice. There was no gradual transition or formal plan in place—once she became pregnant, it was a quick “goodbye.” To make matters worse (yes, they became worse), JP had an ectopic pregnancy that required surgical intervention to remove her 8-week old fetus. As JP later told me, “It was whirlwind craziness.”

I met JP after the resolution of the ectopic pregnancy. I familiarized myself with JP’s medical history prior to our first meeting, and I frankly expected the worst. I was therefore extremely surprised at how cool and calm JP was during our first encounter. As a matter of habit, I try to get to know the person behind the patient when I first meet someone new. I find that it helps in determining treatment decisions to get a sense of a new patient’s personality, their risk tolerance, and their likelihood of adhering to certain regimens.

During our initial conversation, it became clear to me that—despite a 9-year history with the disease—JP had absolutely no clue what lupus was or what she was up against. She thought that lupus
was a disease that eventually would just “go away” and that it made little difference whether or not she took her medications. Her knowledge of her disease process was, at best, poor. She had no idea what Libman-Sacks or lupus nephritis meant. While I was shocked with her lack of knowledge (although it is not uncommon among patients to be this uninformed about their disease), I took the situation as an opportunity to start from the beginning, explaining to JP what lupus is as well as what her serologies were and what they meant.

We then talked about JP’s goals and dreams, which included having children and finishing college. Because she needed so much 1-on-1 education about her disease, I scheduled JP for follow-up appointments every 2 weeks. She became an eager learner and often asked what “her numbers” meant. She started to become an advocate for her own care, frequently asking me what she could do to better help control her disease. It was an important step when JP began to understand that I was in her corner and would help her in this difficult fight.

Our conversation about contraception, unfortunately, did not go as well as our initial discussions. Despite the significant danger, JP was adamant that she wanted to become pregnant again “as soon as possible.” Her obstinance literally sent a cold chill through my spine, so I tried to negotiate (ie, beg) to come up with a reasonable solution.

I tried my best to explain to JP that a pregnancy at this time would be extremely dangerous, though I tried to remain cool and calm so as not to ratchet up the level of drama. JP is one of my more educated young patients (she is a college student) so I showed her lots of data to hammer home my point. Fortunately, she agreed to stop trying to get pregnant for the time being, although this remains a frequent topic of discussion between us.

We then turned to a discussion of treatment. JP “had had it” with mycophenolate mofetil so I suggested a trial of rituximab, which, while not approved for the treatment of SLE, has shown the ability to decrease disease activity.1 I also suggested azathioprine at the highest dose possible given JP’s stage III and IV kidney disease.

Although, knowing JP’s prior issues with nonadherence, I was leery to introduce an additional medication, I also suggested most of our patients’ worst nightmare—high-dose prednisone (40 mg). To cement our “team” relationship, I gave JP my cellphone number in case of emergency and emphasized to her that she needed to let me know if she decides to stop any of her medications as soon as possible.

As nurses, one of our primary jobs is to provide our patients with appropriate education so that they understand their disease and gain insight into why we are suggesting specific treatment options. I tend to give out information in small doses. I also provide my patients with a list of reliable online resources and suggest support groups to help them avoid those dreadful blogs that promise “miracle cures” (I once lost a patient because of such a website). In today’s information-rich environment, we need to be Internet cops—there are too many unreliable websites that can provide our patients with misleading information.
In treating lupus, we may sometimes need to take creative approaches that require us to think outside the box. But most importantly, we need to get to know our patients and embrace their disease. It takes a team to beat the beast. 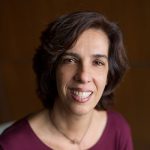 Monica Richey, MSN, ANP-CP/GNP, has been a nurse for 14 years, 12 of them in the field of rheumatology. She received her training at the Hospital for Special Surgery in New York, where she developed several different patient education programs focused on topics such as cardiovascular disease prevention, contraception, and preventive health. She is the Advocate Member At-Large for the Rheumatology Nurses Society and has participated in several federal meetings helping to support patient advocacy groups. Ms. Richey is currently working as a Nurse Practitioner at the Division of Rheumatology at Northwell Health in New York.