I still vividly remember the day we received the news that WS had passed away at the age of 32.

A regular patient we had been seeing for more than a decade, it had been less than 1 month since WS’ last appointment at our clinic. We had gotten to know her family—including her husband and children—very well as we managed the ups and down of her aggressive systemic lupus erythematosus (SLE).
WS was a model patient, always taking her medications as prescribed, showing up for every scheduled appointment, and getting pregnant only when her physician told her it was safe to do so.

That’s what made the news of her untimely death such a shock to us all. There was nothing in her most recent workup that indicated an emergent medical condition. A massive, fatal heart attack? At only 32 years old? What are the odds?

Actually (and unfortunately), the odds are rather high.

Women aged 18-44 years who have been diagnosed with SLE have approximately 9 times higher risk than the general population of hospitalization due to heart attack or stroke. The risk of death due to cardiovascular disease (CVD) is 17 times higher in patients with SLE and heart attacks occur 52 times more frequently.1
In a nutshell, while the risk of CVD in the general female population increases after the age of 55, in women with SLE, it’s early adulthood where the risk of CVD is highest.

It’s well documented that the mere presence of SLE serves as an independent risk factor for CVD. Therefore, even if you screen both for modifiable risk factors such as smoking, hypertension, and obesity, as well as nonmodifiable risk factors such as age, gender, and family history, in determining a patient’s risk of a CVD event, you still must also factor the presence of SLE into the equation. Let’s also not forget that many of our SLE patients are being treated with corticosteroids, which further increases the risk of CVD.

While the reasons for the increased risk of CVD in younger women with SLE are not entirely clear, it is thought to be related to the interplay of inflammatory mediators such as leukocytes, cytokines, chemokines, adhesion molecules, complement, and antibodies that result in the formation of atherosclerotic plaques.1

So what can the nursing community do to mitigate this risk? In 2010, the European League Against Rheumatism (EULAR) published recommendations for the management of CVD in patients with various rheumatic conditions, but unfortunately left SLE out. Consequently, there are no clear guidelines to pull from to help guide screening and management of CVD in patients with SLE. And with all of the other complications that often arise with our SLE patients, it can be easy to forget about our patients’ hearts.

I was involved in one of the first CVD prevention programs in the country specifically targeted at patients with SLE. Beginning in March 2009, we enrolled 121 patients who were regularly assessed for modifiable and nonmodifiable CVD risk factors and educated on risk reduction strategies. Although we noted positive changes in diet and exercise—along with mean high-density lipoprotein and mean triglyceride levels—at the end of 3 years, there were no significant changes in blood glucose or body mass index levels.2

Nonetheless, this prevention program was well received by our lupus patients, who are always asking for information and guidance regarding diet and exercise. Anecdotally, there seemed to be a tremendous difference in patients’ diets based upon their socioeconomic status. Clinic/Medicaid patients were more likely to have a poor diet and less access to fresh food and vegetables, and often could not afford a gym membership.

Participating in this program taught me that changes must be introduced gradually for most of our lupus patients—too many changes suggested at once were seen as an impossible challenge. I felt victorious when patients told me they had stopped drinking soda. Walking 30 minutes, even just once a week, was cause for celebration. There were times when we took two steps forward and then two steps back, such as when a patient spent months losing 5 or 10 pounds before suffering a major disease flare which put him back on prednisone and reversed the previous weight loss. Some patients lost interest in making lifestyle changes as their day-to-day struggles with their disease became too difficult, while others continued to make changes despite many obstacles. Overall, I would say that patients loved the 1-on-1 attention they got through this program, and I made many new friends.
Unquestionably, we need more research to help us understand why our patients with SLE, and especially young women, are at such an increased risk of CVD, but it is important for us all to be cognizant of the facts and inform our patients of the challenges that may lie ahead for them.

Finding out news like we did with WS can be a jolt. While we know that there are significant health risks among our patients with SLE, it’s never an easy day to get the ultimate bad news about any of our patients. It’s incumbent upon the rheumatology nursing community not only to teach our patients but to provide them with support to make lifestyle changes to impact their health. So “have a heart” and challenge your patients—you may be surprised at how much you are able to accomplish together. 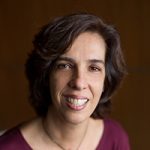 AUTHOR PROFILE:
Monica Richey, NP, MSN, ANP-CP/GNP is a nurse practitioner at the Division of Rheumatology at Northwell Health in New York, New York, and is the Advocate Member At-Large for the Rheumatology
Nurses Society.