New patient referrals are always exciting (at least to me). It’s like putting a jigsaw puzzle together.

DL was one of those more complicated patients, a 48-year-old female referred to us for evaluation with an elevated rheumatoid factor (RF) of 55.8 u/ml and pain in her hands and neck that had been responsive to prednisone. She was referred by her primary care provider for evaluation after a preliminary diagnosis of rheumatoid arthritis (RA).

At her first visit, DL reported having pain in her hands and wrists for several months. She told us that her hands felt “puffy,” but she was uncertain if they were swollen. DL told us that she usually felt awful in the mornings, with stiffness in her hands that would last for hours. She also reported swelling in her feet and ankles with periorbital edema, which again was worst in the mornings, as well as general fatigue. The remainder of our review of symptoms was normal.

On physical exam, we found mild periorbital swelling that was worse in the right eye. No joint swelling or synovitis was noted. She had tenderness of the 2nd thru 4th proximal interphalangeal joints over the right hand and over the bilateral trapezius muscles. No other abnormalities were noted.

As we listened to DL’s description of her symptoms and began assembling the pieces of her diagnostic puzzle, it became more and more obvious that this was not likely a case of RA. While DL had some characteristics consistent with RA (such as arthralgias and elevated RF), several of her other complaints (such as neck pain, lower extremity edema, and periorbital edema) are not typically associated with RA.

Clearly, additional testing was needed to help fill in some of the gaps. We ordered anti-citric citrullinated peptide and anti-nuclear antibody tests, along with other serologies, to evaluate for possible connective tissue disease. Full lab results are included in Table 1 (values in yellow fields are considered abnormal). 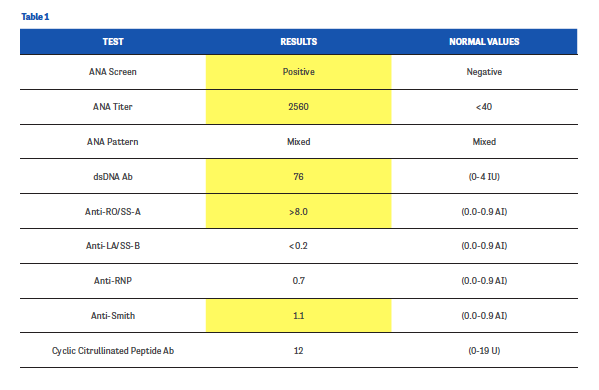 Sure enough, DL’s CCP results were negative, confirming our suspicion that we were not looking at an RA patient. Her serologies were notable for high-titer ANA, positive anti-Smith antibodies, positive anti-double stranded DNA (dsDNA), and positive anti-Sjögren’s-syndrome-related antigen A antibodies. The positive dsDNA and anti-Smith antibody results are very specific for lupus. These results, coupled with DL’s arthritic symptoms, led us to a diagnosis of systemic lupus erythematosus (SLE).

When we brought DL back to our office and told her the news, she was naturally surprised. She came to our office expecting to have her initial diagnosis of RA confirmed and to begin on a treatment regimen. Now, she was being given a completely different diagnosis with very different consequences. This was a difficult conversation for all of us, and I took considerable time explaining to DL the natural history of SLE and the possible courses it might take in the future.

We started DL on hydroxychloroquine (HCQ) since it has been shown to help control pain in patients with SLE as well as to help reduce the frequency of disease flares. Before writing the prescription, I emphasized to DL some of the potential adverse effects of HCQ, including retinal toxicity, and reinforced the need for regular field vision testing.

DL returned to our office 3 months later, reporting some general improvement, include a reduction in fatigue and joint pain. She had discontinued prednisone, which was also a positive sign. None of the classic symptoms of SLE, such as malar rash, photosensitivity, alopecia, fevers, and pleuritic chest pain, were yet apparent.

DL’s case isn’t one of those classic presentations of SLE that many of us are used to seeing. By listening closely to her story and identifying outlying results from her physical exam and lab tests, we were able to figure out how her jigsaw puzzle of symptoms fit together. We’re hopeful that she’s on the right track to a more stable future, though we’ll obviously have to watch carefully for any further bumps in her path.