We all know that there is a lot of heterogeneity in medicine. That’s true in every specialty, from cardiology to gastroenterology and yes, to rheumatology too. The patient we see with psoriatic arthritis (PsA) in room A will often be very different from the patient with PsA in room B. Not every case will be easy to diagnose and treat, and it’s important not to neglect the role that gender plays in the way that a disease such as PsA presents to us.

Let me use two examples to highlight this concept.

Lily, a 40-year-old female, was referred to our rheumatology clinic by her primary care physician (PCP) with a preliminary diagnosis of “possible fibromyalgia.” That’s something we see commonly, and especially among women in their 30s and 40s. Lily’s primary complaint consisted of pain in her bilateral shoulders, wrists, and ankles. She told us that she was having trouble using her hands due to swelling and that she kept dropping things because she couldn’t grip them properly. She also complained of fatigue, headaches, and numbness and tingling in her extremities. What most bothered Lily was the effect that these issues were having on her day-to-day life. Lily worked as nurse case manager at a pediatric practice nearby and her crushing fatigue was starting to take a toll on her performance. “When 4 p.m. hits, I can barely stand up,” she told me. “It’s all I can do to even make it out to my car.”

A review of Lily’s medical history showed that she was diagnosed with psoriasis approximately 10 years ago, but she said that the condition hadn’t bothered her in several years. Her PCP had recently prescribed meloxicam 15 mg daily, which Lily said was providing minimal relief of her symptoms. Taking into account Lily’s current diffuse joint pain and swelling, along with her previous diagnosis of psoriasis, we knew that this wasn’t simply a case of fibromyalgia. We suspected a diagnosis of PsA and consequently talked with Lily about potentially starting methotrexate. Lily, however, wasn’t so easily convinced. She said that she felt she checked all of the boxes for a fibromyalgia diagnosis—joint weakness, fatigue, headaches, and more—and was furthermore hesitant about methotrexate due to its side effect profile. The best we could agree on was a 3-month trial of hydroxychloroquine.

After those 3 months were up, Lily’s symptoms were unimproved, and she agreed to give methotrexate a try. This didn’t help either, but Lily refused our recommendation to add a biologic. So we switched to another oral therapy, leflunomide. This switch not only did nothing to help Lily’s joint pain and swelling, but it caused a severe skin reaction. In fact, Lily’s psoriasis began to flare and was worse than she could ever remember. Naturally, Lily was quite frustrated by now since not only was her condition not improving but was actually getting worse. She left our office with information on adalimumab, infliximab, and apremilast. She returned two weeks later ready to give adalimumab a try. We’re currently waiting to see if it’s going to be helpful.

Let’s contrast Lily’s story with that of Bill, a 65-year-old male who came to us in a much different manner. Bill was referred to us by his dermatologist, who he had been working with for several years to help manage his psoriasis. His skin issues were well-controlled, but he had recently developed significant, persistent low back and neck pain, which prompted the referral to our office. Our physical exam showed significant nail onycholysis, but no active psoriasis. At this initial visit, Bill prioritized his neck pain as his primary complaint, especially as it was causing severe, disabling headaches several times a week. As with Lily, he was most bothered by the impact that his symptoms were having on his day-to-day life.

Suspecting a diagnosis of PsA based on his symptoms and presentation, we started Bill on methotrexate 10 mg weekly. Four weeks later, Bill said he was feeling much better, but labs showed elevated liver enzymes, so we switched him to leflunomide 20 mg daily. Unfortunately, he didn’t see much improvement with leflunomide, and Bill went on to cycle through a variety of biologic therapies, none of which were terribly effective. It wasn’t until Bill received a series of epidural injections that his symptoms began to improve. Now, Bill’s psoriasis and neck/back pain have significantly subsided, and his condition has stabilized.

As new research is published, we are learning more about how and why men and women eventually diagnosed with PsA tend to present differently. Women, for example, tend to present in a manner similar to Lily, with fatigue, peripheral joint pain and functional limitations, while men tend to present more frequently with axial disease. 1,2 Getting a better handle on these gender differences may allow us to more carefully individualize our care and improve our diagnostic and treatment pathways. Admittedly, we still have a long way to go, but we’re slowly figuring out why the Lilys and Bills in our professional life follow such different storylines. 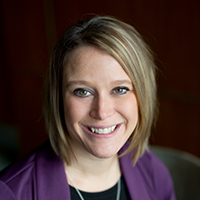 Author Bio: Carrie Beach BSN, RN-BC, is a rheumatology nurse with the Columbus Arthritis Center in Columbus, OH, and the President of the Rheumatology Nurses Society.

Participants will receive 2.25 hours of continuing nursing contact hours, including 1.25 nursing pharmacotherapeutic hours, by completing the education, completing an online evaluation, and receiving a post-test score of 70%: RNP V6 Issue 4: Battle of the Sexes: The Differences Between Men and Women with Psoriatic Arthritis