After more than a decade living with rheumatoid arthritis (RA), I can say without hesitation that the most challenging parts of my healthcare journey have been figuring out how to manage pregnancy and breastfeeding to bring my three children into the world. The struggles I faced on my own path to motherhood inspired me to start a support group in 2015 for moms and moms-to-be living with chronic illness.

My group, called Mamas Facing Forward (a private group on Facebook and online at mamasfacingforward.com), has enabled me to interact with hundreds of women living with rheumatic diseases from all over the world. From these women, I learned that I am actually one of the lucky ones. Despite the challenges I personally faced during pregnancy and breastfeeding, I always had a supportive rheumatologist who was willing to do research and offer me treatment options for each pregnancy based on the most recent data. Not every rheumatology patient has been so lucky.

Prior to the existence of the American College of Rheumatology (ACR) Guidelines on Reproductive Health, each provider had to seek information about pregnancy and breastfeeding individually and from sources they researched on their own. This resulted in a wide range of experiences for rheumatology patients, many of which were quite negative. To demonstrate the importance of these new guidelines, three of the moms in my support group graciously agreed to share their stories. (Note: Some names have been changed to protect patient privacy)

Ava found herself unexpectedly pregnant approximately 6 months after being diagnosed with systemic lupus erythematosus (SLE). As soon as she realized she was pregnant, she called her rheumatologist for advice. He didn’t seem to have many answers as he said he had only cared for one pregnant lupus patient in the past. His initial recommendation was for Ava to stop taking all of her medications immediately. Finding her rheumatologist’s lack of knowledge alarming, Ava began searching for additional information herself. She found a high-risk OB/GYN, who referred her to a maternal fetal medicine (MFM) specialist.

By the time Ava was able to see the MFM, she was 12 weeks along, and her lupus was flaring. The MFM recommended prednisone to control the flare, but Ava’s rheumatologist would not prescribe it, even after the MFM called twice to discuss the issue. “I felt abandoned,” Ava told me. “I was scared about how I would possibly get the care I needed, and I was a bit panicked at the idea that I’d have to live with pain and flares through the rest of my pregnancy.”

Frustrated with conflicting advice and the lack of treatment options, Ava began searching for a new rheumatologist. It took time, but 7 months into her pregnancy, Ava was eventually able to find a rheumatologist who was well versed in the management of pregnancies among patients with SLE. “I learned a lot about advocating for myself during this process,” said Ava, whose son is now 2 years old.

As a single woman who became a mother through artificial insemination, April planned her pregnancy very carefully. Diagnosed with juvenile idiopathic arthritis as a child, she knew managing her arthritis would be an important part of the equation. After consulting her rheumatologist 3 years ago, April was instructed to stop all medication for 3 months prior to trying to conceive. She flared badly only 6 weeks after doing so, but the only treatment her rheumatologist would offer was prednisone. Although April wasn’t comfortable with the side effects, she took the prednisone.

Once pregnant, April consulted an MFM, who told her a biologic medication would be a better choice than prednisone for her and the baby. Unfortunately, April’s rheumatologist refused to prescribe a biologic, even after the MFM provided studies showing there were safe options. Feeling she couldn’t manage pregnancy without some kind of treatment, April reluctantly stayed on prednisone.

Even after delivery, April’s rheumatologist would not prescribe medications other than prednisone because she was breastfeeding her daughter. “I gained more steroid weight than pregnancy weight,” April told me. “I got a broken rib, I used crutches because my ankles were so bad, and all my rheumatologist did was increase the prednisone even more. I felt stuck because it’s not easy to switch rheumatologists. It felt like my only choices were to stay on steroids or go without medications, and neither were good options for me.”

As a single mother caring for her newborn on her own, April knew that controlling her arthritis was vital, but breastfeeding was also extremely important to her. Consequently, she did research of her own into the safety of etanercept during breastfeeding by using LactMed (the National Library of Medicine’s database of drugs and other chemicals to which breastfeeding moms may be exposed), reading scientific studies, and by speaking to other mothers who had used etanercept during breastfeeding. Based on her research, April made the decision that she was comfortable using etanercept while breastfeeding. However, in order to get the prescription, she knew she would have to lie to her rheumatologist and tell him she had stopped breastfeeding. April admitted to me that she wasn’t proud of the tactic she used to gain treatment, but that she felt she did what needed to be done. “It’s not something I recommend people do, but I felt backed into a corner,” April told me.

Jane, currently a mother of two little girls, told me that navigating conception, pregnancy, delivery, and breastfeeding while living with RA was extremely stressful, confusing, and lonely—because she had to do it all without the help or support of her rheumatologist. Each time Jane informed her provider that she was pregnant, her rheumatologist would simply schedule Jane’s next appointment for more than 9 months out. Jane thinks her rheumatologist viewed pregnancy as a threat to her health. “She made me feel reckless,” Jane admitted. “I never felt so lost, scared, and alone.”

Jane braved two pregnancies without the support of her rheumatologist, deciding on her own to participate in MotherToBaby observational pregnancy studies with the hopes that her own life-changing decisions might make things easier for the next generation of mothers.2 Today, Jane said she is considering a third pregnancy, but she’s nervous about even broaching the subject with her rheumatologist. Complicating matters further, Jane lives in a rural area that is already a 3-hour drive from her rheumatologist (the closest practice to her house), so changing practices isn’t a realistic option. “I’m more empowered and educated than I’ve ever been,” Jane told me, “and yet one of the most prominent items in our ‘con list’ is lack of rheumatology support.”

These three stories illustrate just how important it is for rheumatology providers to have an official set of evidence-based guidelines to consult when counseling patients who are or wish to become pregnant. Personally, I hope the new ACR guidelines will help providers feel confident offering an appropriate range of treatment options during pregnancy and breastfeeding. I have first-hand experience regarding the difference between an unmedicated pregnancy (my first) and one where I stayed on a biologic (my last). Unmedicated during my first pregnancy, I flared while pregnant and then flared even more horribly postpartum. I was forced to give up breastfeeding before I was ready. During my third and final pregnancy, I was able to stay on a biologic throughout the pregnancy, had almost no postpartum flare, and was able to breastfeed for as long as I desired.

“I hope the new guidelines provide rheumatology providers with the information they need to confidently champion and advocate for their patient’s pregnancy goals,” Jane told me. “We are desperate for their support.” 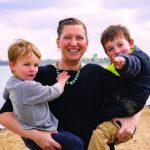 AUTHOR PROFILE: Mariah Zebrowski Leach is a writer, patient advocate, and mom of three living with rheumatoid arthritis. After learning firsthand the challenges of facing pregnancy and motherhood with a chronic illness, Mariah became passionate about supporting women with chronic illnesses who are or want to become mothers. She launched Mamas Facing Forward in 2015.